Dubai, iconic for its high rise buildings including the World’s tallest building, the Burj Khalifa, is the business hub and holiday destination of the Middle East. 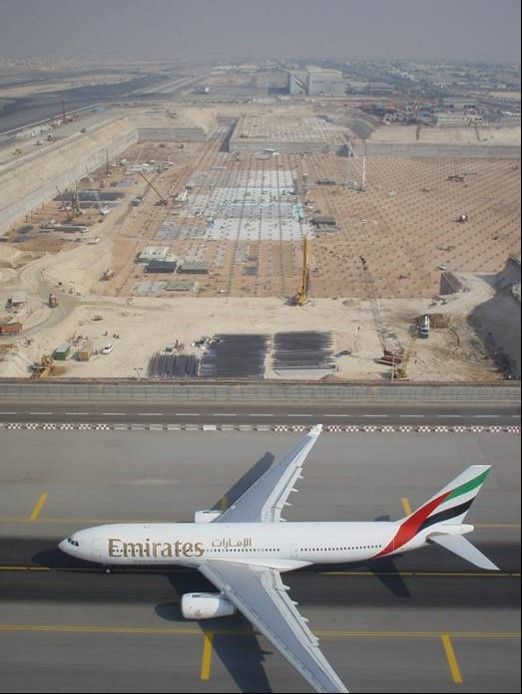 To build itself as major transport hub for passengers and cargo travelling across the globe, in 2002 Dubai’s Department of Civil Aviation (DCA) initiated construction of the Dubai Airport Terminal 3 building and concourses 2 and 3. It covered a massive area of 750m by 500m and was excavated up to 25m deep. When it was completed in 2008 the Terminal 3 building was the largest building in the world per floor space and was the largest airport terminal in the World until September 2019, when Beijing Daxing International Airport opened. The Terminal 3 iconic building is constructed to look like an aeroplane wing, and initially was exclusively for Emirates airlines.

To help realise this fantastic engineering ambition, WJ Groundwater were, of course, brought onto the team.

To facilitate the excavation works in the dry, WJ Groundwater used its considerable experience dewatering large scale project in Europe installed a large scale dewatering system.  A key selling point of WJ Groundwater’s solution was that despite the sheer scale of the project, all the deepwells were installed around the perimeter of the site. This meant that the Main Contractor could get on with the excavation and construction works without having any obstructions. At peak construction WJ were operating in excess of 200 deepwells as well as a fully automated data logger monitoring system that allowed WJ and their clients to monitor water levels across site in real time from a website.

WJ Groundwater is very proud of their achievements and is honoured to have worked on such an iconic project following our work on the airport itself.